Have you seen the (poorly written) article in The Huffington Post about the school in Pennsylvania that chose to ban Mark Twain’s The Adventures of Huckleberry Finn? It says that the black students were made uncomfortable by the language in the book. 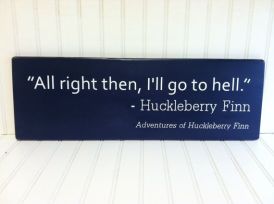 Art Hall, principal of the school in Wynnewood, says the book’s use of racial slurs was “challenging for some students, who felt the school was not being inclusive.”

In the (much better written) article from the New York Post, the writer calls out the “PC Police” by pointing out that not teaching this book is a miserable decision, and the way the proclamation was announced was equally poor.

[The teachers] put poor old Huck Finn and Mark Twain against the wall, stood in a line and yelled “fire.” They didn’t simply leave the book off of the curriculum; they put it on a blacklist. They told their students — and, eventually, the media — that this is a dangerous book.

Not Actually Reading the Book: A Teacher’s Frustration
I’m willing to venture an assumption that most of the people who are offended by this book have never read it. I mean, when you propose the argument of, “Hey, do you want to read a racist book?” there’s not much wiggle room to actually believe this could be a foundation of the American Canon.

So I ask: Do you remember reading The Adventures of Huckleberry Finn? (The Sparknotes don’t count.) It’s a thick book, and I mean this literally and metaphorically.

Twain published the book in England in 1884 and the U.S. in 1885. For those on of you don’t know your U.S. history, this is 20 years after the Civil War, 22 years after the Emancipation Proclamation. Twain set the book in antebellum America on purpose. But more on that later.

In a nutshell, Huck is a rough neck kid whose drunk father, Pap, likes to beat on him and hates the fact that the Widow Douglass wants to educate and reform Huck in order to make him respectable (sounds familiar). Huck wants to escape the small town, so he decides to run away. While running away, he comes across Jim, a slave who is also escaping. Huck has been taught that slaves are not people, and helping one escape sends you to hell, a common lie taught to people in the mid 19th century. (Good thing we don’t teach falsities nowadays).

But that word Offends Me!
Again, I’m going to bet most of the people who want to argue that the book is offensive have yet to read it. But we’ll move on as if everyone has read it (I make assumptions like this daily).

Can we not see that the use of the N-Word is supposed to make the reader feel uncomfortable?

Twain, I’m betting, would agonizingly argue that the public gets put into categories when they read this (never mind the fact that at the beginning of the book he says there’s not a symbolic meaning to the book. See what he did there?). It seems like most people who are too closed minded to actually understand what’s going on in Twain’s novel would more likely side with Huck’s drunken father, Pap. Pap is all about keeping his son from any form of education.

These modern day Paps may not be violently drunk child abusers, but they certainly are just as ignorant. These Paps might say, “I don’t like the fact that such derogatory language is presented to students like that, and that it’s condoned by the state department of education.”

If it’s taught right (again, more assuming), students (include yourself in this) would realize that the book is SCREAMING this obvious truth: Just because society says that IT is right doesn’t  actually mean that IT is right.

The reason Twain has such offensive language is NOT because he is condoning it, but because the strength of language renders readers incapable of becoming complacent. It literally moves the reader to become pissed off.

When was the last time you learned anything from something that did not move you? I can answer that for you. Never.

Go to Hell (Well then!)
As I mentioned earlier, “proper society” taught kids that helping a slave would send them to hell. Never mind the fact that these people were treated as property and living in their own form of hell on earth.

One of my favorite lines from the book is when Huck decides to help Jim and willingly gives up his soul in order to help. He says, “All right, then. I’ll go to hell!”

Instead of praising Huck’s bravery, we’re sending Huck to a polishing school, teaching him not to question the traditions set in place by the establishment. More than that, we are retarding his maturation towards becoming a self-sufficient, policy questioning, educated man. Instead, Huck is being molded into a mindless cog that spins when the machine tells him to spin.

Go Ahead. Get Offended. Bet That Will Spurn You Into Action!
When a piece of literature is written by a man like Twain and the mindless cogs show off their lack of understanding, we get this mess. We get “education leaders” (I use that term loosely and as an insult) who are negating the fact that Twain is teaching the lesson that we are constantly presented with situations that make us question our morals, question our ethics, even question our faith on a daily basis, and we are REQUIRED to make a choice. We don’t get to tattle to mommy. We have to make hard decisions every day.

Huck was presented with a chance to overthrow the status quo. He knew he had to fight the established reason. He could become as white washed as Tom Sawyer’s fence, but that would betray the foundational intelligence of humankind.

I believe we choose to label others differently who have done the same thing historically. Wasn’t Rosa Parks a hero? Wasn’t Dr. King a martyr? Even those louder and harsher than Parks or King, like Angela Y. Davis or Malcolm X—are they not mentioned with a tone of dignity? Yet we want to abolish a book that still piques our hearts and souls towards heroic actions all because the words are offensive.

Hello, Establishment? Reason? The words are supposed to be offensive. If the words, the actions of the status quo are not offensive, then Huck’s actions would require not the slightest bit of courage, making Huck no better than the ones slinging about racial slurs as if they were water. The lack of action due to an established cowardice is what I find offensive.

The lack of action due to an established cowardice is what I find offensive.

(Social) Slavery Still Exists
Twain published this book 20 years after the Civil War. He set this book during slavery to show that the legal slavery of antebellum America and the imposed slavery of the (unconstitutional) aristocracy is one and the same.

Social slavery is still alive today. Sure, the actions might look different, and the color of the slave’s skin is certainly different, but slavery has continued to permeate its way into society.

How dare you have a differing opinion or say something slightly outside of the political correct norm. Because of this we will give you 30 lashes. Oh, we can’t physically whip you, boy? That’s okay, we’ll eliminate your effect on the everyday conversation by ruining your character and twisting what you say. We will certainly ruin your life and send you to (society’s) hell.

This site uses Akismet to reduce spam. Learn how your comment data is processed.